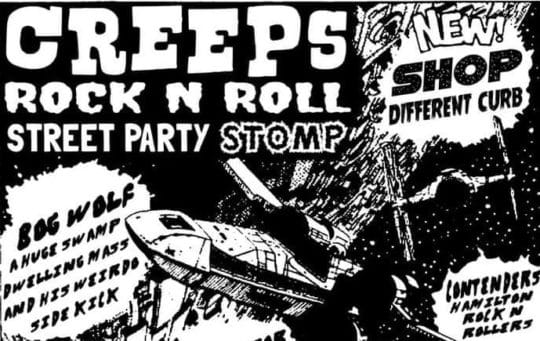 Step the fuck up cos it’s Creeps festival time at the sick as……. Newtown festival. Our new shitty budget as fuck on some other curb stage will be in hard out mode, and those suckas will bang out some noisy rock n roll. It’s all gonna be there for yo shiny ass to stomp to. Like a magical voodoo train or some hypnotic arsehole wrenching for the power to be “Mr or Misses Creepola. It’s just gonna be another budget, on the curb stage featuring some shitty bands you may not know. But you who have been to any Evil, Ray Ray or Creeps party night will know that them shit bands are no goose on stage. They’re more like panthers in semi automatic arse kicking mode. And we’ve seen the results of your shin kickin’ asses from previous years. So don’t frett fucker co it’s gonna be another wyld time on Wilson Street. Here’s the bands:

Bog Wolf. Just plain shit but we love him and his side kick sooooooo much. The new incarnation of Tape Wolf. Proper budget rock n roll trash!.
Requin, Fuck don’t know much about this Sydney band except that they’re totally weird and suit Creeps nicely. Indie pop with hints of experimental written all over them.

Transistor. Do not at all let the age of these young psych heads fool you. They are as good as any psychedelic band roaming the Wellington circuit.

Dad Jokes. A coupla arseholes from Auckland. They really are amazing at Dad Jokes and they bring the mean party.

The Contenders. A hot as party punk band from Hamilton. Keen to see them stir some shit. Heard they’re a great high N.R.G band. Fucken’ on the curb they’ll rule Newtown!