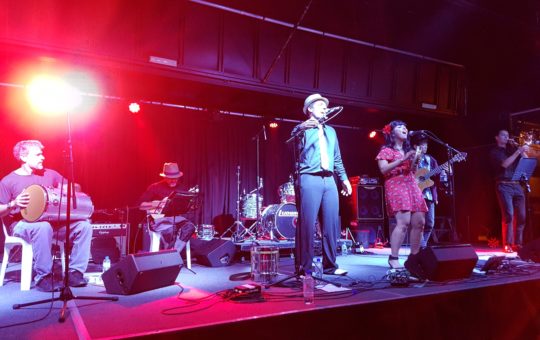 Consisting of Brazilians and Kiwis the band are always adding new material to their repertoire to keep the shows fresh and exciting. Their trademark is to “sambafy” all genres, including some all-time Kiwi classics.

With an impressive fan base in the capital, their uplifting roots samba melodies and hypnotizing beats create the ultimate party atmosphere.
Só Samba provides the people of Wellington the chance to dance up a storm – lose yourself in the hedonistic world of Carnaval!

Achievements:
Só Samba is renowned for bringing Carnaval to Wellington, having performed 9 years to massive crowds of enthusiastic fans.
The band performed at some of New Zealand’s largest festivals such as the Newtown Festival 2016, 2017, 2019 and 2021 CubaDupa 2016-2021 and Wellington Jazz Festivals 2014 – 2020.
In Auckland, they performed at the biggest Brazilian Festival in New Zealand, the Brazilian Day 2016 and 2018, to a crowd of over 5,000 people where they were the only band invited from outside Auckland to perform for the largest Brazilian community in New Zealand.